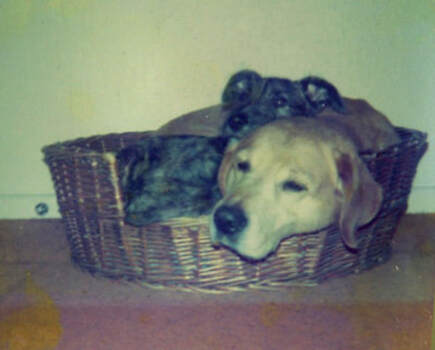 So why Woof Sox?
My Dad was a delivery driver and his ‘round’ included clients in London. One afternoon Dad had stopped for his lunch by a block of flats that had a shallow pond full of rusty bikes and bags of rubbish. One of the bags that caught his eye.… it was moving! There was still filthy water in the pond and this particular bag had been thrown in the middle. Having considered his options for a few moments , he rolled up his trousers and waded in to grab the bag. His heart broke when he opened it. It was full of lurcher pups only a few days old!
He tipped them all onto the grass to check for signs of life, and one of them started moving. He rubbed it to stimulate it’s breathing and warm it up and having confirming that the rest had gone over rainbow bridge he wrapped the puppy in his jacket and placed it in a spare box from the van in the footwell of his van. With the heater on full blast he then completed his round and came home with a spindly little lurcher pup who we called Charlotte.
​
Both my Mum and Dad had a heart of gold when it came to animals. If a dog was in need they would help – if not by giving it a home with us, then finding someone else that could take it in and love it.
We ended up with a Long Haired diabetic Jack Russell who came from a broken home, a lurcher who was dumped in a layby by a travelling family, a LOT of chickens that had escaped from the local chicken processing factory, ducks, a rescue pony, a rescue horse, a dog I rescued from a life on the streets whilst a student and countless other furbies that have graced us with their presence. (I really should make a list one day).

Charlotte went on to have three pups of her own. Tragically she fell ill after giving birth and after an emergency trip to the vets we found out she had a massive tumour and had to be put to sleep.
Her pups then stayed with us until they all succumbed to old age. Tim, William and Cindy were the thread that was woven through our childhood along with their Mum, Charlotte, Rusty the Lab and all the other furry friends that we have been privileged to know through our lives. All loved and all wonderful in their own way.

But Why Socks?
Having left home for University and a degree in Fashion and Textiles I followed a successful career in fashion for 30 years. Fashion can be a flippant and wasteful industry and as you get older you realign yourself with your own scruples and morals so I left my full time job and took up art. I loved painting and quickly became the ‘go to’ for all friends and relatives to paint pet portraits and landscapes on commission.  Alongside my painting I designed on a freelance basis and became a partner in my husbands’ sock business.
It seemed natural then, that I would extend my dog painting with dog designing and pretty soon we had a range of socks featuring our own dog, a Manchester Terrier!
The range sold out to Manchester Terrier owners in 3 days and we knew that if we wanted to support dogs in need and give back to the people that tirelessly care for them we could do it through Woof Sox sales.

So after a lifetime of designing clothing and painting pet portraits for a living, I decided to combine the two and use it as a vehicle to support breed specific welfare charities.
It is no secret that people have struggled through the pandemic and some have had to give up their pets through ill health, losing their job, or moving into rented accommodation.
Charities that are set up for specific breeds know exactly what type of home suits that particular breed and so hopefully a better success rate which results in a happy woof!
I hope that you will join me on my journey as I aim to donate at least £1000 to breed related welfare charities in 2021 through sales of Woof Sox!
Details of the charities that I link up with are below and will be added to as we expand our collection of breeds. If you have a breed that isn't represented get in touch and we can add it to the list! :)

Tell us about your pets on our
​social media pages!
​We love to hear about how they have changed your lives!